Mahseer is a Local words means " The Big Mouth " , It is fish closely related to European Bardel & Carp. This creature is known to be the toughest among the fresh water sport fish. The fish has elongated body With pointed snout.The inter orbital space is flat while the jaws are of equally sized. Barbels are in two pairs with the rostral barbel shorter than the maxillary. Its ia highly finicky & moody fish, The body color is Golden , greyish on dorsal side & reddish - yellow fins.

It is cold water fish. Mahseer's habitat has high oxygenated water with rocky bed . Once Found from Afganistan to south east Asia "The Mahseer" (Barbus tor putitora) is the most spectacular fish present in many of the rivers originating from the Himalaya’s. Now this fish is found in Indian Himalayas & in some places in Nepal. Mahseer is migrating fish , during winters fish moves to the warm water. As this fish has great smelling sense therefore it can detect food from quite a distance ,Its diet mainly includes fish & aquatic arthropods.

There habitat has high currents & fast flowing so this fish is a ultimate swimmer, this fish swims upsteam & can go through rapids of 20-25 knots. Not much is know about the life span of this fish but so expert guess that they live upto age of 20-25 years , the largest speciman even caught was 121 lbs.

Angling period for Mahseer can be well splited in two parts Spring ( pre Monsson ) & Autumn ( Post Monsoon). Pre & psot monsoon periods one will find clear water & water level is also quite good during this time. Fishing is stictly prohibited during monsoon as it is the breeding time for the fish.

The best ways of Mahseer fishing is Spinning, It is a fish know for is fight, After hooking one will realise the amount of strength. it is the largest member of the carp family in the world.

"MAHSEER IS A DREAM FISH FOR ANGLERS" But like other wildlife, this fish is trying hard to survive the strokes of Urbanisation & Development . Other major threat for Mahseer is Poarching. There are different poarching technics used such as bombing , electric current , Bleeching powder etc. Is these circumstances we as The Wildlife Travels beleaves that this spectacular fish will only survive if Angling holidays are promoted to remote regions & through which locals will realise the importance of this fish.

REGARDLESS TO YOUR FISHING TECHNIC, OUR TRIPS STICTLY WORKS ON CATCH & RELEASE RULE.

Plan your perfect vacation with INDIA ANGLING. Choose among hundreds of all-inclusive offers! 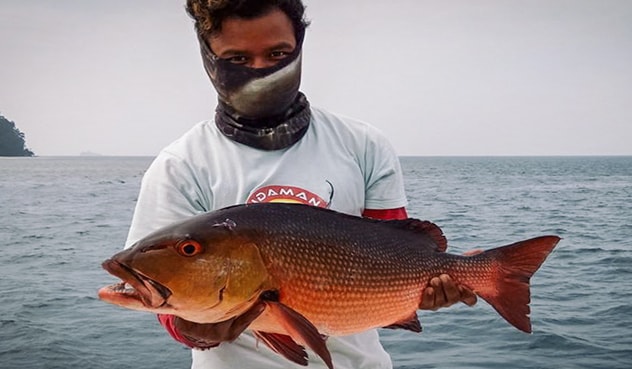 Big game fishing in Andaman Islands, one of sport fishing last frontiers. Here you have a very realistic chance of catching the fish of your life time...